Why did Heroku charge my card twice?

You've reviewed your banking statement, and you see multiple charges from Heroku in your account.

If you feel you've received multiple charge attempts from Heroku, we recommend reviewing the article in its entirety before opening a support ticket regarding double charges.

If you believe you've received duplicate charges from Heroku, the first place we recommend inspecting is your banking statement -- in closer detail. Heroku invoice numbers are represented in your bank statement by the month of the charge, followed by a number. For example, JUL-1234567 refers to invoice # 1234567 that occurred in July.

Heroku stores invoice numbers on each month's invoice, as shown in the example below: 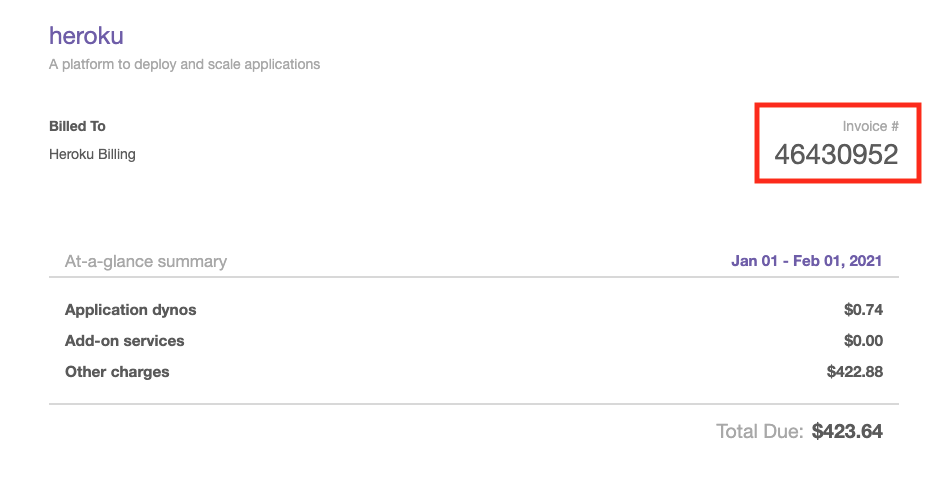 Heroku Personal accounts and Heroku Teams store invoices in two separate locations within the Dashboard. We recommend checking both locations in the Dashboard to locate the source of your charges.

As a courtesy, we've provided this helpful article that explains how to locate each set of invoices in your account: https://help.heroku.com/KANEH8I1/where-can-i-find-my-invoices

If you have a Heroku invoice that has been declined, Heroku will attempt to charge your card a total of 4 times automatically. Each attempted charge can present itself as a "Pending" charge in your bank account. However, since charges of this nature are not successful, they will be removed automatically within 5 - 7 days depending on your banking institution's practices. If you have any questions or concerns about this practice, we recommend reaching out to your bank for further explanation.